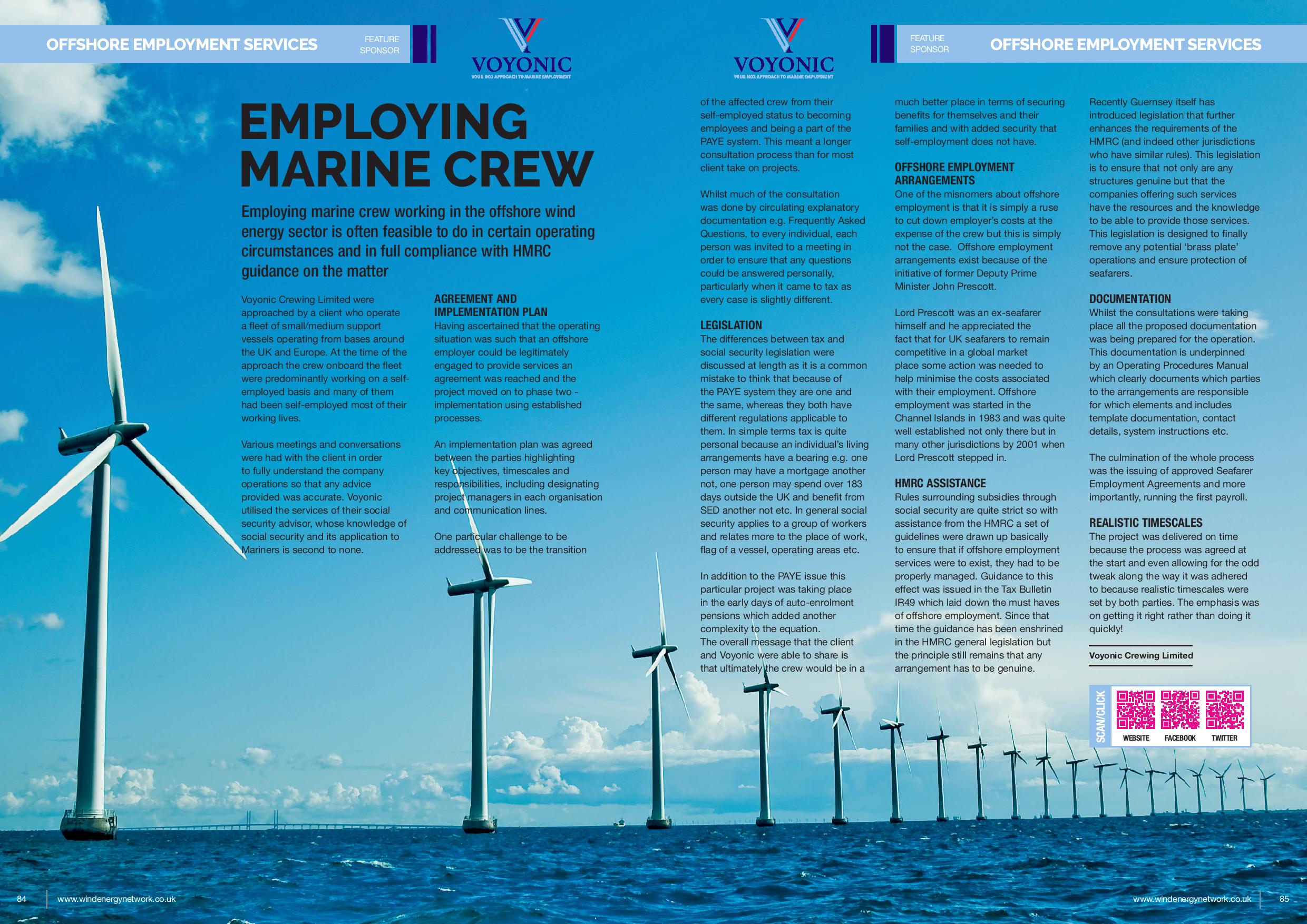 Voyonic Crewing Limited were approached by a client who operate a fleet of small/medium support vessels operating from bases around the UK and Europe. At the time of the approach the crew onboard the fleet were predominantly working on a self-employed basis and many of them had been self-employed most of their working lives.

Various meetings and conversations were had with the client in order to fully understand the company operations so that any advice provided was accurate. Voyonic utilised the services of their social security advisor, whose knowledge of social security and its application to Mariners is second to none.

Having ascertained that the operating situation was such that an offshore employer could be legitimately engaged to provide services an agreement was reached and the project moved on to phase two – implementation using established processes.
An implementation plan was agreed between the parties highlighting key objectives, timescales and responsibilities, including designating project managers in each organisation and communication lines.
One particular challenge to be addressed was to be the transition of the affected crew from their self-employed status to becoming employees and being a part of the PAYE system. This meant a longer consultation process than for most client take on projects.
Whilst much of the consultation was done by circulating explanatory documentation e.g. Frequently Asked Questions, to every individual, each person was invited to a meeting in order to ensure that any questions could be answered personally, particularly when it came to tax as every case is slightly different.

The differences between tax and social security legislation were discussed at length as it is a common mistake to think that because of the PAYE system they are one and the same, whereas they both have different regulations applicable to them. In simple terms tax is quite personal because an individual’s living arrangements have a bearing e.g. one person may have a mortgage another not, one person may spend over 183 days outside the UK and benefit from SED another not etc. In general social security applies to a group of workers and relates more to the place of work, flag of a vessel, operating areas etc.
In addition to the PAYE issue this particular project was taking place in the early days of auto-enrolment pensions which added another complexity to the equation.
The overall message that the client and Voyonic were able to share is that ultimately the crew would be in a much better place in terms of securing benefits for themselves and their families and with added security that self-employment does not have.

One of the misnomers about offshore employment is that it is simply a ruse to cut down employer’s costs at the expense of the crew but this is simply not the case. Offshore employment arrangements exist because of the initiative of former Deputy Prime Minister John Prescott.
Lord Prescott was an ex-seafarer himself and he appreciated the fact that for UK seafarers to remain competitive in a global market place some action was needed to help minimise the costs associated with their employment. Offshore employment was started in the Channel Islands in 1983 and was quite well established not only there but in many other jurisdictions by 2001 when Lord Prescott stepped in.

Rules surrounding subsidies through social security are quite strict so with assistance from the HMRC a set of guidelines were drawn up basically to ensure that if offshore employment services were to exist, they had to be properly managed. Guidance to this effect was issued in the Tax Bulletin IR49 which laid down the must haves of offshore employment. Since that time the guidance has been enshrined in the HMRC general legislation but the principle still remains that any arrangement has to be genuine.
Recently Guernsey itself has introduced legislation that further enhances the requirements of the HMRC (and indeed other jurisdictions who have similar rules). This legislation is to ensure that not only are any structures genuine but that the companies offering such services have the resources and the knowledge to be able to provide those services. This legislation is designed to finally remove any potential ‘brass plate’ operations and ensure protection of seafarers.

Whilst the consultations were taking place all the proposed documentation was being prepared for the operation. This documentation is underpinned by an Operating Procedures Manual which clearly documents which parties to the arrangements are responsible for which elements and includes template documentation, contact details, system instructions etc.
The culmination of the whole process was the issuing of approved Seafarer Employment Agreements and more importantly, running the first payroll.

The project was delivered on time because the process was agreed at the start and even allowing for the odd tweak along the way it was adhered to because realistic timescales were set by both parties. The emphasis was on getting it right rather than doing it quickly!

This article was published in Wind Energy Network – Issue 51